When Thames Water start digging up Norwood Road to lay  a new water main they plan to close York Hill and Lancaster Avenue for 71 days. The 315 bus will be on diversion the long way round to Leigham Court Road via Knights Hill and Crown Lane.

As well as taking passengers to Streatham the 315 is a vital lifeline to many older people living in the streets  around  the top of York Hill.  This part of the route is hail and ride and does not have bus stops with diversion information. Please mention this important change to the 315 bus service to any neighbour who relies on this bus to get to and from West Norwood.

Thames Water are now expected to start their road works just after the May bank holiday. They will post leaflets and hold public meetings as soon as they can confirm a start date.

Thames Water are shutting a small section of Canterbury Grove for a few days starting Thursday 13th September. The road closure means a diversion for traffic including the 315 bus.

The delayed road resurfacing works for Royal Circus are due  Thursday 27th September for 2 days. The 315 bus will be diverted between 8am and 5pm.

When these roads are closed the 315 bus will be diverted up Knights Hill along Crown Lane and down Leigham Court Road.

Thames Water is spending around £5m relining the Leigham Vale water main  and surrounding works. As the mains are underneath our roads the roads have to be closed to traffic to access the pipes.  Leigham Vale remains closed to through traffic till the end of July 2017.

The section of road from the Leigham Vale – Knollys Road roundabout to Leigham Court Road is now one way and closed to eastbound traffic for the next 4- 6 weeks. So all our east – west streets off Leigham Court Road are likely to have increased traffic , particularly Rosedene Avenue /  Mt Nod Road and  Canterbury Grove.

Plans are under way to rebuild the Julian’s school building on its existing site off Leigham Court Road SW16 2RB to help meet the large  increase in demand for primary school places in West Norwood and Streatham. The school was  originally built as a one form –entry school, taking 30 children each year . The new plans create  a 3-form entry school off Leigham Court Road taking 90 children per year. To allow building work to start in February 2013 and be completed by July 2014 so to be ready to open in September 2014 the whole school will move to the new sister Julian’s School in Wolfington Road in December 2012.

The plans for the new Julian’s  Leigham Court Road school can be seen on the council’s web site via the Planning Database-   http://planning.lambeth.gov.uk/online-applications/

The introduction of local policing by Ken Livingstone, with a dedicated local team out and about in every neighbourhood , has been welcomed by residents throughout London. The teams have been a success and helped  create  safer neighbourhoods and reduce  crime.

Responsibility for policing in London lies with, the London Mayor . Police borough commanders are worried the massive cuts in public spending expected next year will have an impact on police numbers on the ground. We  will  post the latest news on this web site.

If you live between Elder Road, Crown Dale, Leigham Court Road, Knollys Road and Norwood Road (in Knights hill ward) your local team is the Knights Hill Safer Neighbourhood Team based at Gipsy Hill police station. Last weekend the police team met up with local ward councillors and Valerie Shawcross, our elected representative on the London Assembly. You can email Valerie about London and policing matters  at  Val@valshawcross.com.

For more information on the Knights Hill police team  see http://www.met.police.uk/teams/lambeth/knightshill/index.php. Contact the team by email  KnightsHill.snt@met.police.uk or by telephone  020 87212618  or 07920 233844. Of course in an emergency always call 999.

If you would like to know more about policing matters in your local area you can sign up to receive regular  email/text  alerts at   http:///www.communitysafe.gov.uk. Email is free and text messages should cost no more than 10/12p per message. You can opt in or out of the service at anytime.

The most severe winter weather for 30 years has had a terrible effect on road surfaces right across the country.

The council is using the latest technology to make quick patch repairs and over 1,000 have been filled since January.   Larger patching, using traditional  ‘hot rolled asphalt’, takes longer to do –  so Ernest Avenue, Elder Road and Crown Dale will be done within the next few weeks. Crown Lane from Knights Hill to Leigham Court Road  is due to be completely resurfaced by end of April and  Robson Road soon after.

The  Government has just announced an extra £100m to fix potholes, and Lambeth will get a share of that money.  But too many of our local roads are still sub-standard and vulnerable to damage in freezing or very wet weather.

Unfortunately when the Lib Dems  & Tories were running Lambeth the council used a  cheaper road resurfacing material on many roads including Norwood High Street and Ernest Avenue in 2005. Stone mastic asphalt is cheaper but does not last long on roads used by heavy vehicles such as buses and HGVs. Cracks started to appear within a couple of years and have got much worse during this winter.

Road resurfacing costs £25-£30 per sq metre varying with the price of oil.   Lambeth’s roads need quality investment not patching. Labour, if re-elected on May 6th,  has  promised to  make the biggest-ever investment to replace Lambeth’s crumbling roads and broken pavements by selling off surplus council office blocks

In the meantime to report  potholes requiring urgent repair please phone 020 7926 9000  or email Streetscene@lambeth.gov.uk giving details  of the location. Red routes are the responsibility of the London Mayor’s Transport for London – call 0845 305 1234 to report any potholes on red routes . 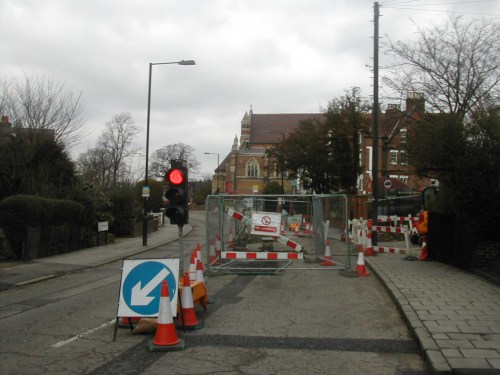 Gas mains throughout much of south London are being replaced as they have reached the end of their life. As the mains are usually under the roads there is a great deal of traffic disruption.

Southern Gas has been working on replacing the gas mains along Leigham Court Road since July 2009. Work is due to be finished by 19th March but  problems elsewhere could delay the finish until  June 2010. To ensure there is progress on the Leigham Court Road works Lambeth Highways has asked Southern Gas to always have at least three people working on the mains replacement during the working day.

Southern Gas claim they do not have enough gas engineers  to cope with all the urgent gas leaks in south London and keep three people working on the Leigham Court Road mains replacement. Unfortunately there have been a large number of gas leaks over this winter and the gas engineers have to be diverted to work on the urgent repairs. For example there are several gas leaks and a mains water leak in  Coldharbour Lane  in Brixton where work is in hand for 6 weeks to repair these.

There are plans to close Knollys Road over the May 2010 bank holiday  – to fix the broken water mains near the Leigham Court Road end of  Knollys Rd. 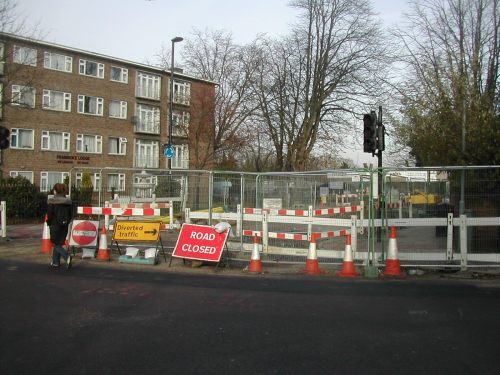 The junction of Knollys Road with Leigham Court Road is  re-opening  to traffic on Monday 7/12/09.  Traffic has been diverted along Broxholm Road and Glennie Road for the last 5 months. The road has been closed since the summer July  so Southern Gas can relay gas pipes along Leigham Court Road.

The re-opening date was brought forward following a meeting on 19/11/09 of businesses,  local councillors, traffic engineers, & residents with Southern Gas.