Work is due to start in the autumn to create a new green 20 mph calming zone west of  Knight’s Hill and Norwood Road. This scheme is a unique approach to traffic calming and will include 85 new street trees. Some of the trees will be planted in tree pits in the road and others in the pavement. 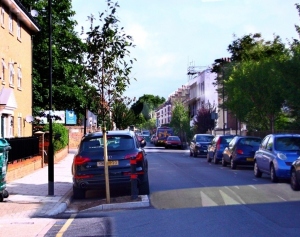 Tree in a road tree pit

The scheme has been developed following a campaign by local residents to expand the existing 20mph zone around Cheviot Road and tackle rat running and speeding to and from Leigham Court Road. A series of consultation activities followed an initial resident’s workshop in 2010. The necessary statutory notices have already gone out and fuller details of the scheme will be available soon with more opportunities to comment.

A group of residents are talking to Lambeth council’s tree experts about the types of street trees that would best suit the area. To get involved in these discussions please email the group at:   trees4westnorwood@yahoo.co.uk