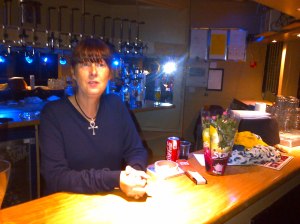 Elizabeth at the Club last week

West Norwood’s Snooker club, run by Elizabeth Ward, is now closed as the council has agreed plans to build 9 flats above Iceland. Local people, including an elderly lady who held her wedding party in what was then the Banqueting suite, have been making farewell visits to a West Norwood institution.

For details of the new flats see our post on 8th March https://westnorwood.wordpress.com/tag/snooker-club/ 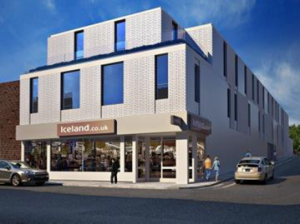 Developers propose to demolish the snooker club & offices above Iceland at 348-352 Norwood Road SE27 9AA and rebuild as 5 three bedroom  and 4 two bedroom maisonettes. The shop will remain.

A decision is due by early April.

Problems at the Snooker Club

Ann Kingsbury outside the Snooker club

Following residents concerns about noise and trouble from  the Snooker Club in Waylett Place of Norwood Road a public meeting has been arranged at 7.30pm on  Tuesday 7th February at Chatsworth Baptist Church Hall, Chatsworth Way, SE27 9HN.

The police , local councillors and solicitors representing the club will be present. All welcome.

If you can’t make the meeting but would like to put forward your views you can  get in touch with your local Lambeth councillor or Cllr Ann Kingsbury  on akingsbury@lambeth.gov.uk

The local police, residents, businesses and councillors have concerns about anti-social behaviour around the Snooker Club in Waylett Place off Norwood Road and the impact of late night music and drinking at the Club on West Norwood town centre and nearby residential streets.  The Snooker Club is used mainly as a night club and only a few snooker tables are left.

For a number of months the local police have been working with the owners of the club to try to improve behaviour at the club.  Sadly recent events, including the tragic murder of a young man close to the club in August, suggest this approach is not working. Local councillors have now asked the Lambeth Licence Committee to review the licence arrangements. The Snooker Club is licensed to sell  alcohol from 12noon to 5am everyday and for music & dancing from 8pm to 5am Wednesdays to Sundays.

If you would like to comment on the licence and the running of the Snooker Club you must write to Lambeth Licensing, Blue Star House, 234-244 Stockwell Road, SW9 9SP or email licensing@lambeth.gov.uk. The deadline for comments is Wednesday 28th September. The Licence Committee only looks at problems under four headings: public safety, preventing crime & disorder, public nuisance and protecting children from harm.

Alternatively you can  contact Cllr Jane Pickard on: jpickard@lambeth.gov.uk or 07805 943 085. Jane can pass on comments to the Licence Committee on your behalf  – and you can choose to remain anonymous.

Many residents have complained about  antisocial behaviour late into the night coming from the West Norwood Snooker Hall in Waylett Place off Norwood Road.  Following a public meeting in November with the police, local councillors are calling for a review of the licence hours for the Snooker Club to try to tackle the late night disturbances.  If you have noticed any problem incidents at the club recently please get in touch with brief details , in confidence, by emailing Cllr Smith  msmith10@lambeth.gov.uk or Cllr Kingsbury  akingsbury@lambeth.gov.uk