Barclays Bank to close in June

Local Barclays bank customers received a letter today saying their branch will be closed on 21st June 2019. They are told to go to 136 Streatham High Road SW16 1BN instead. 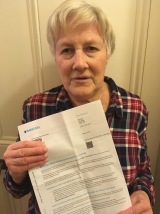 “Barclays is the last bank in West Norwood and a vital part of the mix of services in our main shopping street providing banking for local businesses and residents. The Barclays ATMs are always busy giving us access to cash 24/7. We cannot afford to let it close.”

Local Labour councillors have started a campaign to stop the closure. Sign the petition here.

And write to Barclays – their business case for the closure is set out here.