350 years before and after Windrush

“Before and After Windrush: 350 years of Black People in Lambeth” is a free exhibition in Lambeth town hall in Brixton SW2 1RW on weekdays 9am to 6pm until Friday 12th July.
Evidence from Lambeth Palace & council archives of Black People in Lambeth goes back to the 1660s. It includes records  of former slaves and servants who were being baptised in a Lambeth parish church in the eighteenth century, African princes & sons of chiefs who were being educated in Clapham and the mysterious, unnamed Black Woman of Brixton Causeway who was struggling to bring up her child in Lambeth in the 1720s.
Photographs by Harry Jacobs of the Black community in Brixton between the 1950s and the 1990s are also on display.
To meet the curator of the exhibition on Monday 1st July at 6.30pm email artsweb@lambeth.gov.uk to book a place. 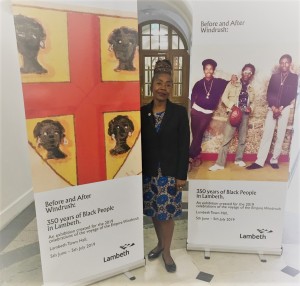 Cllr Sonia Winifred, pictured, said: “Multiculturalism and the history of our Black communities in Lambeth goes back much further than most people probably realise.
We have a packed schedule of events through the month to mark Windrush Day on 22nd June it. Check out the brilliant programme of events we are putting on throughout June”
For details of Windrush events see: https://love.lambeth.gov.uk/windrush-celebrations-2019/