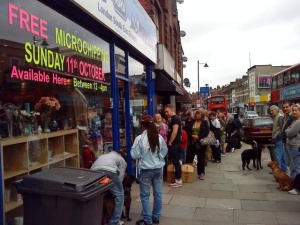 The RSPCA shop in West Norwood microchipped 124 animals in one session on Sunday 11th October . So many people turned up with their dogs and cats that there were queues down the road.

RSPCA branch spokesman David Mawson said: “We are delighted that so many people turned up with their animals to be microchipped. But it is not just microchipping – we were giving away flea treatments, worm treatments, dog leads and collars and neutering vouchers and general welfare advice. We have microchipped more than 2,000 animals so far this year.”

The next microchipping clinic is on Sunday 6 December from 12pm to 4pm at 380 Norwood Road, West Norwood, London SE27 9AA – opposite Tesco.